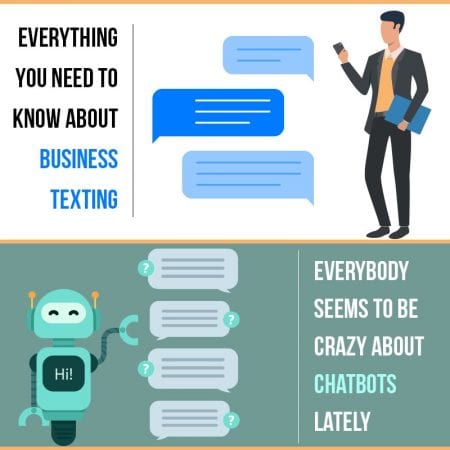 Surprisingly or not, texting can be very effective for any business, whether it’s used for communication or promotional purposes. According to a report from Zipwhip, 91 percent of those interviewed revealed that they do receive business text, while 68 percent of them admitted to sending text messages to their customers.

The same report showcases that consumers consider texting an effective way to reach out to business, as 40 percent of consumers said that they have texted businesses, even without being sure that those companies accept texts, while almost a third of consumers attempted to contact a business through text messages, but without any success.

And we won’t be surprised if these numbers will keep growing over the next years!

“Texting is the form of communication that people know the best and prefer to use, so if you’re not letting your customers text you, you’re sending them to a competitor,” says Zipwhip CEO John Lauer.

But is he right? Is business texting worth it?

Well, considering that almost eighty percent of consumers heavily rely on the native texting apps on their smartphones, Mr. Lauer does have a point.

It was discovered that individual employees are even using their cell phones to text customers. Why? Because there’s no secret that business texting is one of the most efficient ways of reaching customers. And because their employers don’t provide specialized business texting software and equipment, so they don’t have other choices. For us, this is one of the biggest arguments in investing in such tools, as a business owner.

To better understand how this rise of texting started, let’s go down the history lane and see how things evolved…

Many years ago – yes, we can say many – email and phone calls were two of the dominant channels. But as soon as people started discovering how easy and convenient is to text somebody, the first two started losing territory.

A surprisingly large number of people consider phone calls disruptive, not to mention that they ignore those coming from businesses or numbers they don’t know. This surely explains why over 60 percent of those who participated in the State of Texting survey admitted to playing phone tag with customers. Numerous times! And this isn’t something to be proud of.

Finally, the above-mentioned report from Zipwhip found that there are quite a few so-called emerging alternatives to both email and phone calls, but they’re still missing the mark.

Over sixty percent of those who participated in their study said they aren’t interested in downloading branded apps and use them as a way of communicating with companies, while those who are willing to do it end up deleting them shortly after. Yes, these apps do have a chance, but the way brands are interacting with clients through them needs to be improved. This means that good old business texting still has a chance.

On the other hand, everybody seems to be crazy about chatbots lately, which, in one way or another, is a modern form of business texting. Still, they do go against consumer preferences, as potential customers prefer communicating with a person when doing business rather than through a chatbot. But let’s give this…technology some time.

Whether you’re using business texting or other new…methods of getting in touch with your clients, there’s no doubt that this is no easy job, which demands a lot of time. So why not put everything on autopilot?

CRM Solutions USA offers complete CRM solutions for any small business. Contact us today and see how we can help your business grow!